by DPadmin | May 23, 2017 | Historic Charleston, Restaurants, The Best of the Lowcountry | 0 comments 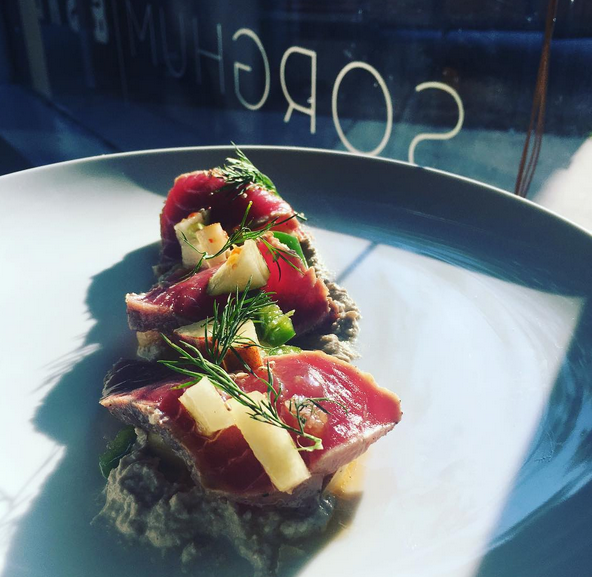 With Charleston being a foodie destination with a reputation that gets glossier with every new restaurant opening, it’s easy to get overwhelmed with what to try next. We’ve taken the liberty of sifting through all the new restaurants in Charleston this spring and compiling a list of those serving up grub worth your dough.

Sorghum & Salt opened in April, and this spot has already racked up a reputation among locals – not bad for a restaurant in its infancy.The menu changes, but as of now you can stop in and choose from their Garden and Grains, Meat and Fish, or Larger Plates menus, all of which are reasonably priced. We can’t vouch for everything, but you can rest assured that the Collard Green Tagliatelle with Shrimp Sausage – Calabrian Chili – Collards and Bread Crumbs — phew, that’s a mouthful, in more ways than one — is a meal to remember. If you haven’t been here yet, you’re doing yourself no favors. Scott’s slow-pulled pork, chicken, and ribs alone will make you moan (that reaction is actually their claim to fame) but you have to also try the fried catfish sandwich — not to mention the fixings. Take your pick of fresh-cut fries, cornbread, hushpuppies, cole slaw, potato salad, baked beans, mac ‘n’ cheese, greens, perlo rice, and, yes, of course, grits.

Love the Mt. Pleasant Benny Palmetto’s? Then you’ll also dig the new downtown sister restaurant Benny Ravello’s, which hit King Street in mid-April. Serving up slices bigger than your hand, Benny’s is in the former George Loan Co. pawn shop and has been operating off the same menu as its predecessor — except this time no beer and wine. But you’ll forget all about your thirst for alcohol once you get a taste of some of the best pie in town. The hottest of hot spots right now is Workshop — an upscale food court that, after less than a month in business, is the talk of the town already. Workshop boasts minimalist decor and maximum flavor. Choose food from Pink Bellies (featuring Thai Phi’s Animal Style Burger), JD Loves Cheese (coming to you from Cynthia Wong, the baker over at Butcher & Bee), or Kite Noodles (Korean food from Jonathan Ory). John Lewis of Lewis BBQ has also taken up residence with his Tex/Mex concept called Juan Luis. There’s also pizza by Slice Co. and Bad Wolf Coffee (also from Ory). The food court seats 100, so grab a seat soon to test the waters for yourself.

Morrison Street’s soul food institution Martha Lou’s has long been a favorite among locals, but a mention by the New York Times in 2011 gave the restaurant an extra, and welcomed, boost. In April, the 87-year-old proprietor opened a second locale in North Charleston, officially called Martha Lou’s No. 2 Love and Happiness Catering, where they’re serving all the faves — fried chicken, mac ‘n’ cheese, green beans — every day of the week.

What new Charleston restaurant has caught your attention?