Why Move to Charleston, SC? What The Holy City Has to Offer 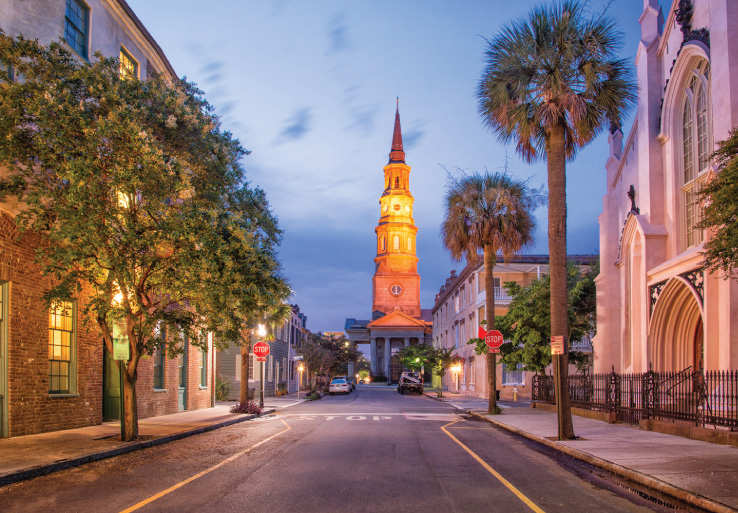 If you are looking for a charming, historic, laidback city, look no further than Charleston, South Carolina. It’s miles of beautiful beaches, friendly residents and thriving economy make it the perfect place to set down roots. There is no other city quite like it, where old families of the area live alongside transplanted young professionals, on the same street where tourists flock.

Whether you enjoy good food, rich history, intricate architecture or famous landmarks like the Ravenel Bridge, you’re sure to find a reason to love Charleston.

Founded in 1670 to honor King Charles II, Charleston is the oldest city in South Carolina and considered its cultural capital. Charleston quickly became one of the most important ports on the eastern seaboard, helping it grow exponentially in its early days. If you are a history buff, Charleston offers endless opportunities to explore America’s past.

In 1780, the British made the capture of Charleston its goal, so several famous battles occurred around it, including America’s greatest defeat in the Revolutionary War, when commander Benjamin Lincoln’s supply lines were cut in Moncks Corner and Lenud’s Ferry, forcing him to surrender the city. You can tour the Moncks Corner battlefield and 32 other Revolutionary battle sites in Berkeley County.

The city’s prominence in America’s history continued into the Civil War, with the first shots fired on Fort Sumter and its surrender to the Union Army not long before the war’s official end. Fort Moultrie played a key role in both the Revolutionary War and the Civil War.

The Charleston Battery, a landmark seawall that protects Charleston from hurricanes, began as a coastal defense against naval attack and is now a neighborhood home to some of the most beautiful downtown Charleston houses for sale, making it a great place to walk through history.

Charleston isn’t all wartime sites, either. The cobblestone streets and historic markers make exploring downtown Charleston an enjoyable exploration of history. You can also tour many traditional homes, take a ghost tour or view the gardens at Magnolia Plantation.

Fortunately, even as Charleston has grown, it has been careful to protect its history, preserve the beautiful historic skyline and keep the beautiful old neighborhoods alive. Charleston was the first U.S. city to establish a board of architecture in 1931 and is home to the oldest community-based historic preservation group.

This focus on preservation helped Charleston earn its nickname as The Holy City. The origin of the nickname, like the city itself, has a colorful history. Some attribute it to the city’s religious tolerance, some to a joke meant to make fun of Charleston’s city pride.

Regardless, no one can deny that the church steeples dotting the skyline make for a beautiful view, whether you see it from land or sea. Skyscrapers haven’t overshadowed those steeples due to a local ordinance dictating that no building can be higher than the tallest church steeple in Charleston.

If you hate the cold, Charleston is the place for you. In the winter, temperatures rarely dip below 50ºF, although there have been a few random snowflakes from time to time during a wayward cold front. These comfortable winter temperatures mean you can still enjoy all that Charleston has to offer during the winter months instead of locking yourself away indoors to stay warm.

Charleston’s summers are perfect for those who enjoy the outdoors, especially water-related activities. Summers tend to be hot and humid, with highs usually in the ‘80s and afternoon thunderstorms that pass through the area quickly. But don’t let the heat and humidity scare you! There’s plenty to do indoors or on the water.

Activities to Help You Beat the Summer Heat

If it’s too hot for you, or an afternoon storm ruins your outdoor plans, there are plenty of activities to do indoors.

Visit One of Charleston’s Many Museums

Some of the most popular museums in Charleston include:

Visit a Charleston Point of Interest or Historical Site

Some of the can’t-miss sites in Charleston you should visit are:

If there’s an outdoor activity you’re interested in, the odds are good that you can do it in Charleston, especially if it’s based on water. Within half an hour of downtown Charleston, there are three beaches, with boating, paddleboarding, surfing, swimming and general sunbathing.

There are five major parks, including Cypress Gardens, the site of the film, The Notebook. Miles of bike trails and walking paths and beautiful gardens are rich opportunities to explore.

If sports are more your scene, there are enough golf courses to keep you busy for a while, or you can check out the Charleston Riverdogs, the minor league baseball team, or the Charleston Battery, the minor league soccer team. Clemson University and the University of South Carolina are also near enough for day trips to catch a football or basketball game or catch the nationally ranked College of Charleston sailing team in action at a local regatta.

Thanks to the expanding Boeing production site and a new Volvo factory, the largest industries in Charleston include the aerospace and automotive sectors, which continue to grow. Partnerships with local universities, including Clemson’s SCE&G Energy Innovation Center, make the economy particularly strong in the energy sector.

University partnerships exist in the medical field, with the Medical University of South Carolina and more than 50 medical development and research labs numerous medical manufacturers creating stable growth in the medical sector.

The military is also a significant economic driver in Charleston. The Citadel, one of the most prestigious military colleges in the country, is located in the city, and Joint Base Charleston is just to the north. In all, more than 90,000 servicemembers and their families live and work in Charleston.

Because of the growing economy, Charleston is a great place for tech startups, making it a popular destination for millennials. Numerous organizations such as Charleston Women in Tech and the Harbor Entrepreneur Center offer opportunities for those wanting to start their own tech company.

Raising a Family in Charleston

Charleston is a great choice if you plan to grow a family or already have little ones and are looking for a place to settle down and raise them. Charleston culture is the epitome of southern hospitality, and this friendly and inviting atmosphere makes a wonderful community for children to grow up in.

In addition to great schools, Charleston is also one of the top 20 safest cities in South Carolina. Mount Pleasant, one of Charleston’s up-and-coming family neighborhoods, is number four on the safest neighborhoods list and presents families with the opportunity for idyllic coastal living. There are several other family-oriented neighborhoods for those looking to raise their young ones in Charleston, including:

If you’re seeking a quieter location within close proximity to Charleston, consider looking at Folly Beach homes for saleor take a look at real estate on Sullivan’s Island, SC. Both areas are located just a 20-30 minute drive from downtown and offer a peaceful getaway spot on the water.

The Charleston Farmers Market is always fun for the whole family and allows your kids to get a taste for fresh fruits and veggies from the surrounding farms while supporting locals. You might also try a raucous pirate cruise that local companies take families on, full of good ol’ pirate fun or visit Angel Oak Tree Park with your little ones to see the oldest tree in the state.

Charleston Makes it Easy to Get Around

In many old cities, getting around can be a challenge, but Charleston is an exception. There’s no denying that traffic exists in the city, but there are ways to avoid it. Charleston is highly walkable, and traveling on foot is often the best way to see everything the city offers. Walking allows you to slow down and appreciate the beauty and history around you. Since Charleston is a peninsula, water taxis make a great alternative to driving a car or taking an Uber.

Charleston also has a strong biking culture, with bike paths, accessible streets and gorgeous year-round weather perfect for biking. If you don’t have a bike, it’s still possible to enjoy this mode of transportation. Holy Spokes, Charleston’s bike share program, can help you get around town on two wheels with 27 locations to pick up and drop off a loaner.

If you have to drive into town, don’t worry about parking because there’s plenty of options available, whether it’s metered street parking or staffed parking garages.

The Charm of Lowcountry Living

The Lowcountry way of living is unique to Charleston and its surrounding counties along the coast. The cuisine is distinctive to the area, with its blend of seafood and African flavors making up an interesting element of Lowcountry culture.

Lowcountry living partly refers to the scenery and ambiance of the region, characterized by saltwater marshes, Spanish moss and gorgeous architecture. The homes are marked by extensive porches that invite you to relax with a glass of iced sweet tea and shutters that stand sentry beside large windows.

Part of Lowcountry life is the welcoming sense of small-town community. Charleston is known for its hospitality and was recognized as Conde Nast’s Friendliest City in 2016. People smile at one another on the street, and strangers aren’t afraid to offer help if they see you need it.

In 2020, for the 10th year in a row, Conde Nast named Charleston America’s Favorite Small City, and Southern Living recognized it as the South’s Best City in 2019.

Experience the Charm and Tradition of Charleston

Charleston, South Carolina, is a city like no other. It is a coastal resort, historical marker and modern family mecca rolled into one. Charleston boasts scenic views, great schools and safe neighborhoods that make it a great place to live.

Young professionals love the area for its nightlife and thriving economy, retirees love the golf courses and relaxing beaches and families relish its comfortable atmosphere and educational museums and resources. If you want to experience charm, tradition and community all in one city, pack your bags and move to Charleston.