The Best Breweries in Charleston, SC 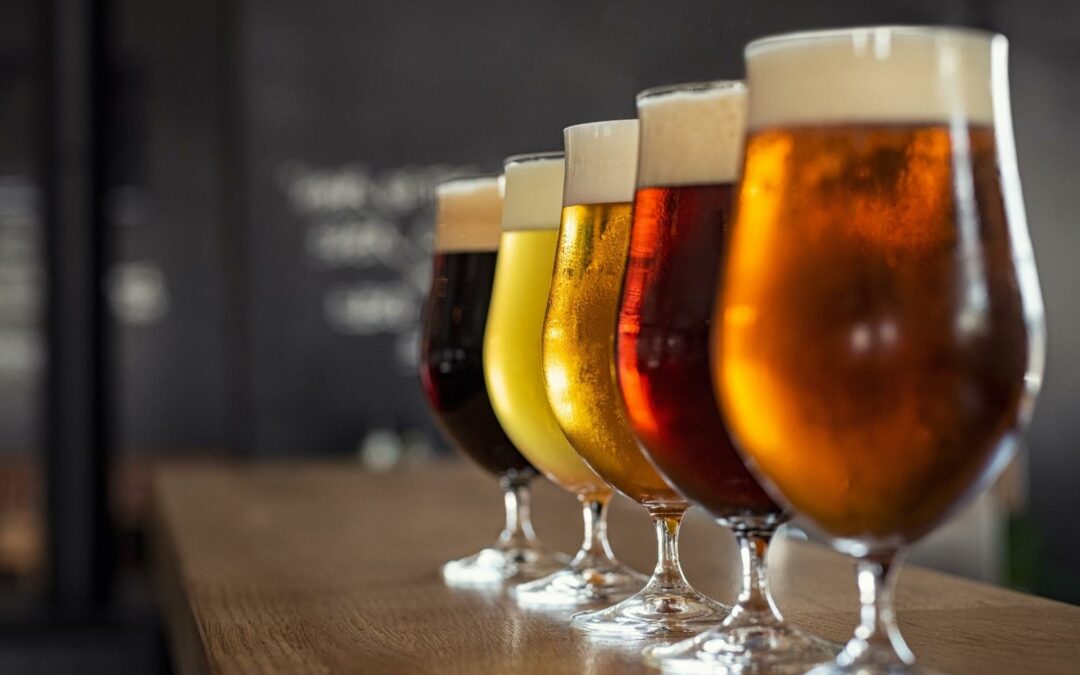 You’re probably already familiar with Charleston’s award-winning culinary scene. What you might not know is that Charleston is also home to a thriving brewery culture. There are 30 craft breweries in the Charleston area, with more opening every year. No matter your preferences, you’ll be able to find the beer you’re looking for in one of the many breweries in Charleston, SC.

Are you wondering “What is there to do in Charleston, SC?” Then you haven’t discovered the abundance of breweries in the city yet. You’ll find many craft breweries in Charleston’s downtown neighborhoods like Wagener Terrace and North of Morrison.

Located at 10 Conroy Street, Revelry Brewing has a tasting room and rooftop bar. Enjoy the views of downtown Charleston while sampling their unique brews. They offer traditional beers like lagers, IPAs, pilsners and other pale ales, along with more interesting brews like sours, wild ales and beers aged in oak barrels.

Revelry Brewing’s offshoot, The Hold, is their barrel house where they experiment with Brettanomyces and barrel-aging their beers. Located at 36 Romney Street, The Hold is Charleston’s only all-sour beer brewery. If you love sour or wild ales, don’t miss a trip to The Hold.

Revelry Brewing was named the Best New Brewery in South Carolina in 2015, and their brews continue winning medals and awards locally and nationwide. You won’t be disappointed with your options here.

With over one dozen beers on tap daily, a restaurant with an all-day menu and an outdoor patio, you could spend all afternoon or evening at Edmund’s Oast.

Located off King Street, Edmund’s Oast Brewing Co. hosts a daily power hour from 4-5 p.m., offering half-priced brews. It’s a great way to try some of their many beers. Edmund’s Oast offers seasonal beers like Oktoberfest and Dunkelweizen and year-round favorites like blonde ales and IPAs.

Edmund’s Oast offers flights, half pints, pints and pitchers of beer. They also provide cans and bottles along with growlers so you can enjoy their beer at home.

Their restaurant menu has traditional pub fare and snacks, but the main attraction is their woodfire pizzas. Their outdoor patio and courtyard are dog-friendly, and they even have an astroturf field for added comfort. Edmund’s Oast Brewing Co. is a great place to spend hours with friends.

Cooper River Brewing was founded by two friends in November 2015. The brewery is located at 2201 Mechanic Street, just a block north of Mount Pleasant Street in the Wagener Terrace neighborhood of Charleston.

Wagener Terrace is an up-and-coming neighborhood with many downtown Charleston homes for sale. It’s popular with young adults and families, offering more family-friendly homes with quick access to breweries and restaurants.

Located at 2038 Meeting Street, Lo-Fi Brewing is a minimalist brewery focused on producing high-quality beers. The owner and brewmaster Jason Caughman only produces a small variety of beer so he can focus on quality and flavor.

You can also find their beers in many local restaurants.

Established at 1513 Meeting Street Road in 2016, Munkle Brewing specializes in Belgian-style ales. Munkle Brewing was inspired by the founder’s uncle, a Benedictine Monk who began brewing beer during his time at a Michigan Monastery.

Munkle Brewing features an indoor/outdoor bar area with pool tables and TVs inside. If outdoors is more your thing, you can relax in one of their rocking chairs while enjoying a beer.

Mt. Pleasant is a large suburban town in Charleston County that is popular among young families and professionals and is one of the fastest-growing areas in South Carolina. If you’re moving to the area or simply find yourself visiting, these are the breweries you’ll want to check out.

Located on Ridge Road, near the beautiful homes in Mt. Pleasant, SC, Westbrook Brewing was founded by husband and wife team Edward and Morgan Westbrook. What began as a hobby quickly turned into an internationally distributed brand.

The brewery offers tours and rotates 22 beers on tap in the Tasting Room and sells cans, bottles and growlers to go. While they only offer a few kinds of cheese daily, food trucks are scheduled frequently to provide meals to enjoy with a cold beer on the patio or the air-conditioned Tasting Room.

Westbrook Brewing’s Mexican Cake beer, originally brewed as an anniversary special, is so popular, it has its own FAQ page!

You can purchase many of their beers for same-day or next-day pickup via the store on their website, but the Mexican Cake beer cannot be reserved through this system. However, they keep a limited amount on-premises for consumption in the Tasting Room if you’re set on trying some. Also popular is the White Thai, a spiced beer inspired by Edward’s passion for Thai food.

Known for unique combinations of hops and grains and a few eclectic local flavors, Two Blokes Beers offers 16 beers on tap in their taproom, with different food trucks and pop-up kitchens scheduled daily.

Their tongue-in-cheek craft beers like Hoppy Little Trees, Tart Vader and Cone of Uncertainty add a little humor to their beers. Wicked Throat Charmer, a New England style IPA, is one of their top sellers, thanks to its hoppy flavor with a bit of bitter aftertaste and hints of citrus and tropical accents.

West Ashley is a primarily residential area in SC that boasts clusters of unique eateries, fusion restaurants and plenty of breweries. Located near the Avondale neighborhood at the bustling intersection of Magnolia Road and Savannah Highway, this lively part of Charleston County is a must-see for craft beer lovers.

With a name like Frothy Beard, you know you’re in for a fun experience at their West Ashley location at 1401 Sam Rittenberg Boulevard. The large taproom serves 32 different beers that rotate throughout the year. Unlike many other breweries, Frothy Beard has its own kitchen, serving up hot, fresh bar favorites, salads and house-made-cookie ice cream sandwiches.

Their flagship Sip Sip Pass IPA and Tides of Galway Irish Red beers are available year-round, but they also offer seasonal ales and sours that are worth a taste. Frothy Beard is the perfect place to unwind and enjoy a cold one after a long day.

Founder Adam Goodwin established this small, focused brewery in 2016, and it has become a local favorite for its simplicity. The facility is rustic, with wood paneling, exposed ceilings and mismatched picnic tables and couches. Foosball and board games are on hand for entertainment. Its comfortable atmosphere means many locals stop on their walks home and order their usual at the end of a long day.

The taproom offers food from a rotating local chef. You can purchase beers from the tap, cans, bottles or growlers, although they aren’t currently refilling them. Their Yacht Party American Lager, a dry American lager, is popular, as is their Pallet Rider IPA, with hints of cantaloupe, melon and peach complementing the hops.

North Charleston is the third-largest city in South Carolina and is the top city in the state for retail sales. If you’re looking for a fun afternoon out at some local shops followed by a tasty cold one brewed locally, this is the place to be.

Established in a former U.S. Navy storage building in 2007, COAST Brewing is family-owned and located at 1250 N Second Street in North Charleston. The brewery is only open Thursdays and Fridays from 4 to 7 p.m., so plan your visit accordingly.

Owners Jamie Tenny and David Merritt are leaders in the Charleston brewery scene. They believe it’s important to source local and organic ingredients to make their beers and are known for their beer HopArt, an IPA with Millenium and Cascade hops. Their Kolsch beer is another popular choice. COAST also brews brown ale, pale ale and seasonal beers.

With fun events celebrating the local community, Commonhouse Aleworks uses its brewery to improve the world around it. Proprietor Pearce Fleming enjoyed listening to his grandfather’s stories of running moonshine as a teenager, so establishing Commonhouse Aleworks was in his blood.

The brewery serves many core beers with a healthy variety of seasonal and limited-edition beers. Their Park Circle Pale Ale is a popular choice among locals with its tropical accents of orange marmalade, tropical fruit and citrus zest. In partnership with Brannon Florie, a local restaurateur, Commonhouse has a full food menu that offers something for everyone through Florie’s at Commonhouse. It even offers a Sunday brunch.

Commonhouse believes in giving back, so a portion of every sale is donated to local community groups in Park Circle. As part of their unCOMMONly GOOD series, they highlight a different charity with special release beers and have helped charities like Make a Wish South Carolina, We Are Family, and Try It for Life.

An artisanal organic brewery, Freehouse is located on the banks of the Ashley River at 2895 Pringle Street. The brewery believes all its ingredients should come from organic sources free of pesticides, chemical fertilizers, GMOs, and artificial ingredients. They believe organic agriculture helps the environment by keeping chemicals out of the water and protecting the local ecosystem.

Freehouse focuses on making seasonal beers from local ingredients. They feature traditional beers like lagers and IPAs while offering sours brewed with their own curated yeast strains. The brewery partners with local coffee roasters for their brown ales and stouts, and all their beers are produced sustainably.

Freehouse has a rotating selection of over a dozen beers on tap and offers flights so you can try smaller tastings. The brewery is dog-friendly, with an outdoor beer garden so you can enjoy the views of the Ashley River.

Started by four friends experimenting with home brewing, Holy City Brewing was first established in July 2011. The brewery moved into its current location, close to Park Circle at 1021 Aragon Ave, in North Charleston in 2018. Holy City serves up to 20 different beers daily with flagship beers and seasonal offerings.

Pluff Mud Porter is one of Holy City’s most interesting beers. It’s described as having a distinct odor due to its mixture of dirt and water indigenous to the Lowcountry region. Another flagship beer, Washout Wheat, is a straightforward and approachable wheat beer.

The brewery has an in-house kitchen featuring bar snacks like smoked wings, burgers, other hot sandwiches and vegetarian options. They even serve brunch from 11 a.m. to 3 p.m. every Sunday. Holy City is kid-friendly, offering a kids menu and house-made non-alcoholic sodas for everyone to enjoy.

Explore All Charleston Has to Offer

Charleston, South Carolina has a thriving craft beer scene. Their award-winning breweries are located in neighborhoods throughout the city, including West Ashley, Mount Pleasant, North Charleston and downtown neighborhoods like Wagener Terrace and North of Morrison.

While taste is subjective, the many craft breweries in the Charleston area offer a range of options sure to please any palate. You can find quieter breweries for a relaxing night out with friends or taprooms with more activities. Charleston even offers dog- and kid-friendly breweries, so it’s fun for the whole family. Explore breweries and more of what Charleston has to offer before your next visit so you can experience the very best of this South Carolina gem.